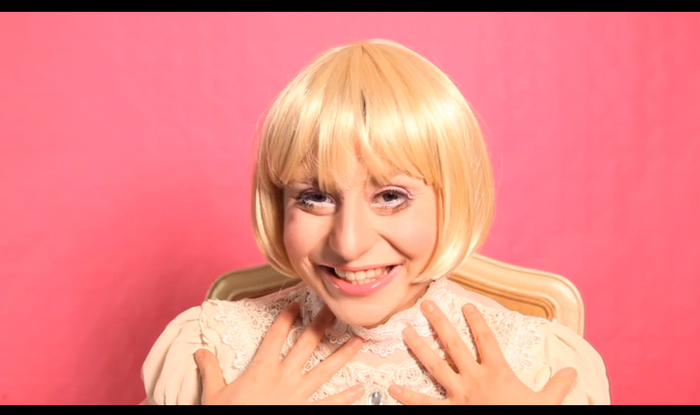 “Oreo,” 2014, is a Youtube tutorial parody which was completed as part of Artslant’s Georgia Fee Residency in Paris. Youtube tutorials have become a common way to disseminate and obtain information about many things including beauty. I use this model to address contemporary political issues and to stimulate dialogue surrounding racism and white privilege. I strategically use humour and the tutorial approach to seduce the viewer and as a communicative tool.

Globally, people spend money and time trying to approximate European beauty ideals. Individuals are bleaching their skin, reconstructing their eyes, noses and even changing their eye colour at the risk of going blind, to pass as White. The character Oreo addresses the very complex issues surrounding one’s claim to Whiteness, passing as White, societal imposition and internalization of white supremacy.

People are intrigued with the performative elements of the work, the high pitched voice and the use of humour. These character traits are important but there is a poignant undertone and a challenging script that is often overlooked and relates to my experiences as an Iranian-Canadian woman. I was raised in a predominately White-catholic-francophone community and since a young age, I was conditioned and socialized by visual culture and narratives of Western cultural imperialism to approximate Whiteness, an endeavour that is unattainable.

White supremacy is a much more useful term for understanding the complicity of people of color in upholding and maintaining racial hierarchies than the term “internalized     racism.” “White supremacy” enables us to recognize that black people are socialized to embody the values and attitudes of white supremacy.

Albeit, Hooks is addressing experiences relating to the black community but I approached this video considering this important distinction and my own experiences with having internalized white supremacy. I was often labeled “whitewash”or “Oreo”when I mimiced White standards. It took years of unlearning in my adult life to embrace and celebrate my differences.

Oreo’s relationship to Whiteness is one that in unique to the experiences of the Iranian diaspora. While I was researching, I came across an article by Alex Shams about the 2010 US National Census, a campaign asking Iranian-Americans to ethnically identify. Most Iranian Americans identified as White because of our lineage to the Aryan race. During the Pahlavi regime and until the revolution in 1979, nationalistic ideologies of racial superiority were imbedded in this generation of Iranians. Many of which migrated to the West holding on to these ideas of white superiority. In the West, claiming whiteness does not save us from racial based violence and systematic racism. Since the 1979 Hostage Crisis and more recently 9/11, Iranians have been lumped in a racialized category of terrorists and seen as threat to the occident. In this work, Oreo claims that she is White because she is Aryan and refutes her friends accusations of conforming by saying: “I am Aryan and you tots hate white people.” This reverse racism rhetoric is commonly used by those who occupy positions of racial privilege, to silence people of colour when they are confronted.

After I completed Oreo, I was in Vienna doing a residency at the Studio Das Weisse Haus. I met an Iranian gallerist from New York who began enquiring about my place of residents, she could tell by my English accent that I was not raised in Iran. I told her that I was currently making a transition from Montreal to Toronto, and that as a woman of colour, I experienced a lot of racism in Montreal. The gallerist looked at me appalled and said “You identify as women of colour?!”  I was taken aback because they appeared offended. I asked them if they identified as white and with a hostile tone they replied that they don’t identify with a race, they are Iranian. This was a pivotal moment because it was the first time I had encountered an individual that made such a claim and I was reminded of the 2010 Census. I started to meet more Iranians that either identified as white or as “Iranian” and were reluctant to accept a racialized identity or acknowledge themselves as a minority.

Prior to coming to Paris, I knew that I wanted to confront France’s legislations surrounding the veil. During this period, Quebec was trying to pass a similar law and there was a cross-cultural link that was urgent to address. The veil, a garment worn by women to show religious affiliation in Islamic countries is a contentious cultural and political issue and has been the subject of political repression and cultural appropriation. In the video, Oreo is instructing the viewer to remove their veil as to assimilate to western culture. While contextualizing the work, I wanted Oreo to resonate with many cultures and I also wanted to address the islamaphoia that was prevalent in France. While I was researching the script, I came across many people who nonchalantly referred to the convenient store as “Arab.” While Oreo is putting on her contacts she states: “I bought this from my local Arab.” I wanted to highlight that this term so commonly employed by the Parisian lexicon is apparent in France’s economic apartheid and also the racialization of this position.