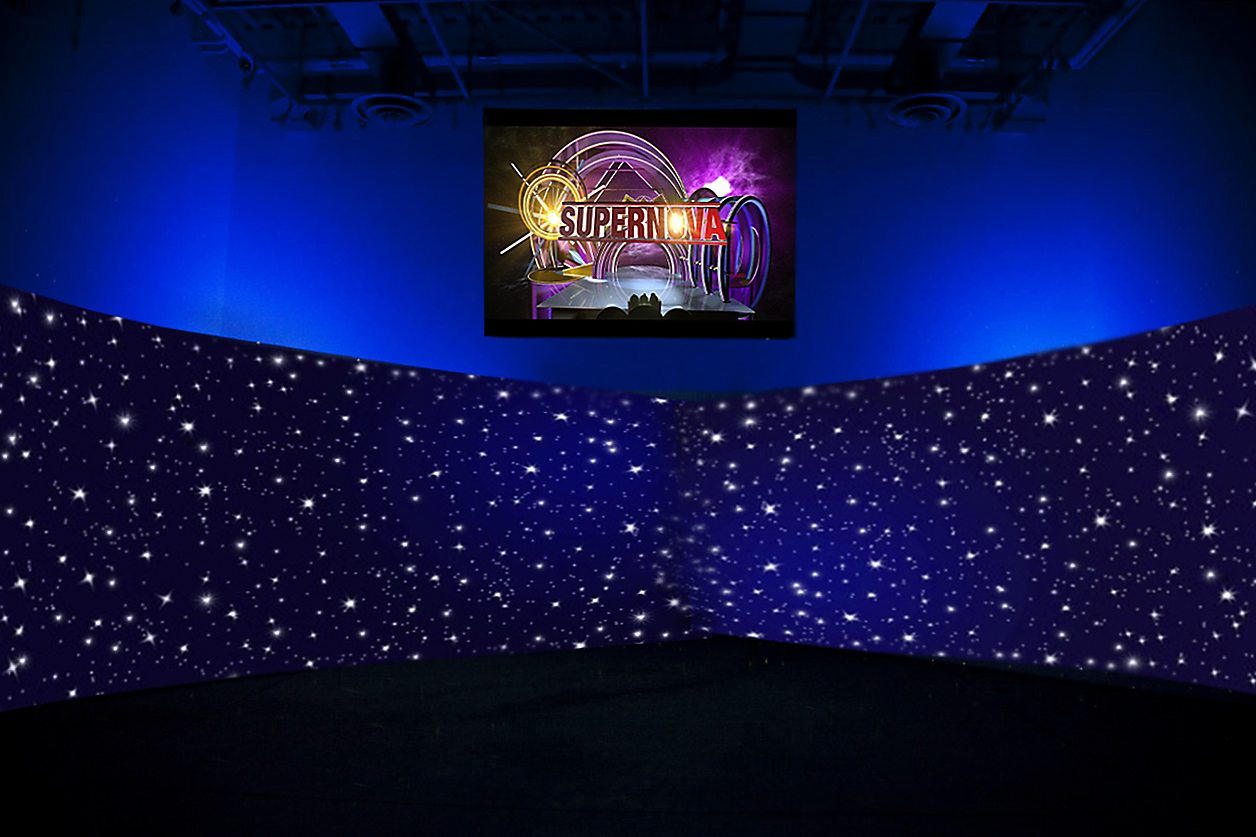 SuperNova is a talent show parody that consists of seven characters in which I perform. The performers are Oreo, Fatimeh, and Coco and each of their acts examine issues of race and ethnic performance; Oreo performs a magic trick with a deck of white “race cards,” Fatimeh sings and performs a neo-orientalist ethnic identity and Coco performs a dance as a diasporic and hybrid subject. The characters perform in the galaxy Messier 82 and present their talent in front of a panel of judges; Sirius, Mira and Bellatrix. Each judge is named after the brightest star in various constellations and each judge represents a character, Sirius mirrors Oreo, Mira mirrors Fatimeh, and Bellatrix mirrors Coco. The talent show sets an ideal stage to critically examine race and ethnic performance.

In the video, Oreo believes she should win because of her race cards when Mira says “she can pass” it suggests that based on her whiteness, she is already favoured and it also references drag culture and “passing.” Notions of passing, authenticity, racial purity and the Iranian nationalist  Aryan race discourse, are explored through this character.

Fatimeh sings a song in Pahlavi, that is, Middle Persian without any Arabic and French loan words. I wrote the song and it was translated by Professor. Miguel Angel Andres-Toledo, an Avesta and Pahlavi linguist and professor from the University of Toronto. Pahlavi is incomprehensible to the contemporary Persian speaker and only ten scholars in the world comprehend  Pahlavi. It is as intelligible as Beowulf to the contemporary English speaker. Many Iranian purists believe that contemporary Farsi has been spoiled and tainted with borrowed Arabic and French terms. Therefore, Fatimeh’s performance critiques both Iranian nationalists and western neo-orientalist tendencies that position the other/self as exotic.

Coco confronts the viewer with the othered body but embraces the alien subject and diasporic position. The character performs in a dark, galactic and open space. The liminal space provides a clean slate as it has no definable borders, physical properties, material, land or topography. Coco illustrates the possibilities that become available to the diasporic subject in the margins and attempts to expand our geographical imagination. Coco is performing the process of hybridity and combines First and Second place epistemologies while introducing a Thirdspace and new epistemic culture.

Further, Coco refuses to participate in oral communication and colonial language. Thereby, suggesting an unwillingness to further perpetuate communicative inequality and hegemonic discourses that are established through language. Coco takes a resistive position and introduces the margin as an ideal site to create a counter-language. Instead, Coco communicates through movement which consists of waacking, blended with traditional Iranian dancing, and gestures from my performance artwork.

Moreover, I am interested in exploring ethnofuturism because it presents the future as a site to deconstruct and reconstruct history. In SuperNova, the audience are ethnic aliens that wear hijabs and ululate. I attempt to challenge the euro-centric cultural gaze that represents eastern subjects as stagnant and frozen in time, supposedly untouched by modernity. Thus, the ululation and hijab situate the eastern audience in the future.

SuperNova examines the socio-political, temporal, linguistic and spatial factors that contribute to the formation of identity. The work is currently a multiple channel video installation. The multiplicity of channels is synonymous with the many subjectivities and spaces (digital, liminal, and material world) that this work explores. Moreover, SuperNova’s constructed digital environment and the green screen aims to expose the construction and fixidity of identity categories. I am interested in how race and gender are performed digitally. For example, the character Oreo’s voice has been digitalized and manipulated to create an infantilizing high pitch vocal. The dancer Coco is also digitalized as their body oscillates between transparency and visibility and is not limited by corporeality. Coco’s body disappears, reappears splits, soars, multiplies and moves through channels and space. The music for Coco’s dance performance is a blend of traditional Persian music accompanied by digitalized and synthesized sounds. “Native Melody” was created in collaboration with Kamyar Jarahzadeh. Jarahzadeh and I explore the possibilities of deconstructing, appropriating and recontextualizing traditional Iranian music to create a hybrid electro-acoustic performance. Further, SuperNova explores the potential for a digital exploration of space that allows for the creation of a new imaginary and geographical landscape. This new site departs from our current world and invites the viewer on an ethnofuturist and world-making voyage.